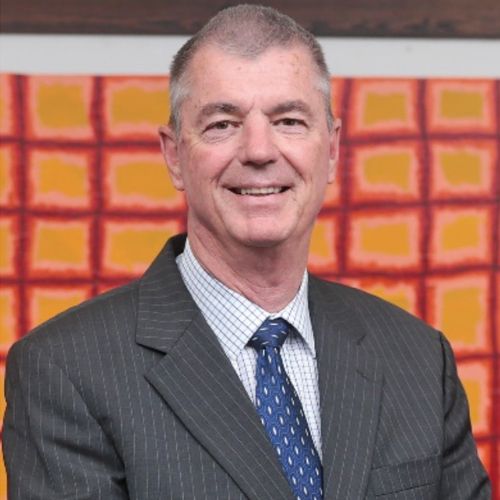 Karl O’Callaghan is the former Police Commissioner for Western Australia, a position which he held for more than 13 years from 2004 to 2017.  He is the longest serving post-war West Australian Police Commissioner and was formerly a career police officer having served for more than 43 years.  He has been awarded the Australian Police Medal and is a Rotary International Paul Harris Fellow, awarded for outstanding community service.

He is also the first serving police officer in Western Australia ever to be awarded a PhD and in 1997 was made a Churchill Fellow.

Karl has overseen significant reform and cultural change within the Western Australia Police Service having been appointed by Government to oversee the implementation of reforms recommended by the Kennedy Royal Commission into Corruption and Misconduct by Police in 2004.  In addition, he has been at the forefront of significant business, innovation and technology change across the policing sector, bringing policing operations into the 21st century with his Frontline First and Frontline 2020 initiatives.

His significant work on police culture not only resulted in the ‘modernisation’ of the WA Police and the ‘softening’ of old hierarchical structures but also resulted in a greater gender balance in the most influential management levels in the Force.  His leadership also saw an increase in the representation of Culturally and Linguistically Diverse Police Officers.  Karl also oversaw the implementation of second tier limited function police officers.

During his time as Police Commissioner he was arguably the most well known and most listened to public sector figure gaining respect for his practical and common-sense approach. He is credited with being one of the only Police Commissioners in Australia to regularly work on the street with front line officers. He was also recognised as an outstanding media performer for his ability to publicly navigate the WA Police through crisis driven challenges and maintain public confidence in policing.

Karl is well known among the Western Australian community for his high public profile on issues of law and order and has been a passionate advocate for those caught up in protracted and inter-generational social dysfunction.  He is recognised for his consistent ‘call to arms’ for joined up Government responses to the most complex social challenges facing our community.  His insights into working with Government and Government departments is especially in demand outside of the public sector.

In 2018 Karl was appointed by the Government to manage the implementation of the ‘Redress Program’ for Police Officers who had been medically retired.  He was selected for this role because of his extensive work in improving the safety and welfare of police in volatile front line policing environments.  These environments present some of the most difficult safety and welfare challenges found in any public sector agency.  He is also known for his passionate advocacy on the implementation of a proper Worker’s Compensation Scheme for Police.

Karl is still very much in demand by the media for opinion based commentary on a range of issues affecting the community and regularly, both writes opinion pieces for print media and also works in radio.

Outside of the world of policing and Government Karl was a board member of the P&N Bank for 12 years. In 2011 he formed Bright Blue (The Police Commissioner’s Charity for Sick Kids) funding the Children’s Cancer Institute of Australia for Neuroblastoma Research, providing funds for Foetal Alcohol Spectrum Disorder in Aboriginal Children; Radio Lollipop; and Interplast Australia for burns reconstruction for children in Mongolia.

Karl and his wife are full time carers for four boys in permanent foster care and he is a regular speaker for the Fathering Project on assisting fathers to become more engaged in parenting.  His experience in dealing with his eldest son who became a methamphetamine addict is of significant interest to many who ask him to speak.

In recent times he has developed quite a high profile as an announcer and DJ on one of Perth’s premier community radio stations and his knowledge of the music industry furnish many amusing and informative anecdotes for his listeners.  He founded his own rock band in 2005 who regularly perform for charity.

Karl is a dynamic, passionate and amusing speaker who draws on a vast range of experiences and true-life stories to emphasise his point and change attitudes and opinions.