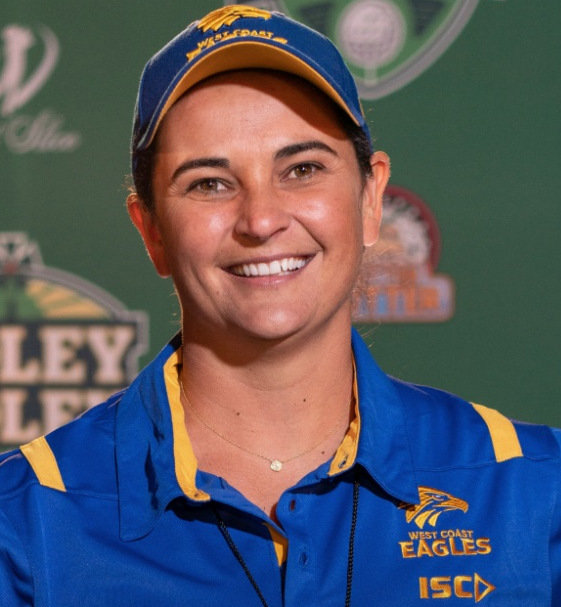 Combining her two passions of being a mother and AFL coach, Michelle’s amazing story is a tribute to what all of us can achieve with enough guts, grit and determination. With over 18 years of coaching experience in the WAFL, AFL and AFLW Michelle’s long and successful career has contributed to the game’s exciting evolution.

At just 21 Michelle made history when she became the first woman to coach professional Australian football at any level when she was appointed assistant coach of the West Perth Football Club in the WAFL.

Her role at West Perth was followed by a three-year stint at South Fremantle Football Club as midfield coach.

Michelle later took on a dual role at Melbourne Football Club as the Senior Coach of their Women’s Team and Development Coach for the Men’s team before being appointed by Fremantle Football Club  (Dockers) to be the inaugural coach of their AFLW team 2016-2018. In early 2019 Michelle was appointed as Assistant Coach of the West Coast Eagle’s AFLW team and in 2021 was offered the opportunity to become Head of Operations & Player
Wellbeing for the team.

Michelle was awarded the AFL Football Woman of the Year in 2013 and in 2014 was announced as AFL DSR Coach of the Year.

Her achievements have made it so much clearer for the next generation of women in football proving that when it comes to football or business, gender is no longer a barrier to kicking goals.

Michelle is an unbelievably engaging, empowering and energetic speaker. She’s a true trailblazer when it comes to breaking down traditional female barriers that surround women in business and sport. She uses her energy and raw enthusiasm to help empower women to be whatever they want to be in life. She’s an inspiration and true professional with a glowing personality that engages audiences from the second she walks onto the stage.

Alternatively, Michelle can tailor a presentation to suit your specific requirements or event theme.